Read PDFRead PDF
This paper explores how various conceptions of the Nazi totalitarian state influenced the prosecution and decisions of the Industrialist Trials at Nuremberg which were conducted against key officials in the companies of Flick, Krupp and I.G. Farben. Drawing on archival materials, I argue that the debate over the Industrialist responsibility could be read as a struggle between competing theories of the totalitarian state. The paper considers the influence of the Frankfurt School and Franz Neumann’s theory of the Nazi state as Behemoth on the prosecution’s innovative theory of the Nazi regime and the opportunity it provided for a finding of corporate and individual accountability for international legal crimes. The Tribunal’s refusal to find guilt implies that it rejected the Behemoth model in favor of a more static, traditional, and monolithic notion of the state famously celebrated in Hobbes’s Leviathan.
Having established these competing notions of the Nazi state, the remainder of the article analyzes their influence on the Tribunals’ limited conception of accountability of the industrialists in three central aspects of trials: the Crime of Aggression, the crimes of spoliation and plunder and the atrocities of enslavement, torture and extermination. 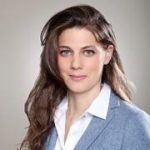 Faculty of Law at Tel Aviv University; she earned her LL.M. and J.S.D. at NYU, where she was also an IILJ Fellow