Read PDFRead PDF
Gentili lays the foundation both of a new science and of a new vision of international order. The new science is the incipient “science” of the “modern” law of nations, in the sense of a ius inter gentes. Gentili is only a short step away from the semantic mutation introduced by Hobbes and Zouche. On the other hand, from a substantive point of view, Gentili’s jurisprudence of war marks the emergence of a specific and distinctly “modern” paradigm, which has produced lasting effects on the internal dialectic of the discipline in the early-modern phase of its development. In this respect, bearing in mind the general historiographical theme of the relationship between Renaissance political thinking and the “modern” school of natural law, Gentili’s jurisprudence of war stands out as crucially relevant in the formation and future developments, not only of modern international law, but also of modern political theory. 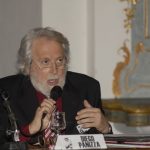 Former Professor in History of Political Thought, University of Padua and Director of the Scientific Committee of the Centro Internazionale Studi Gentiliani