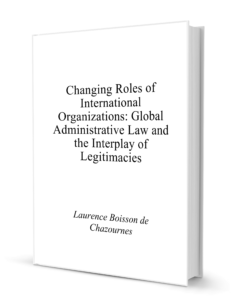 Looking back over the last sixty years, there is no doubt that the role and the capacity of international organizations to conduct operations have greatly evolved. Their mandates have expanded and the objectives to be reached have been diversified. Field operations have increased in a dramatic way. It has become increasingly necessary for international organizations to resort to innovative legal mechanisms to be able to fulfil the new tasks they have been assigned. In the meantime, the appearance on the world stage of a large number of non-State actors carrying out tasks which were traditionally incumbent upon State authorities and intergovernmental organisations, has led to the establishment of specific mechanisms allowing them to collaborate closely with the latter. In face of the challenges raised by these complex interlocking legal relationships, numerous administrative law type principles have emerged as instruments for adapting the classic international system of States and intergovernmental organizations to contemporary requirements.