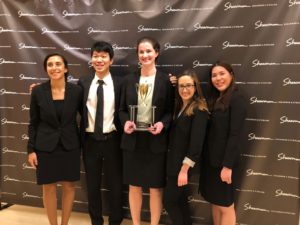 NYU Law School recently participated in the Northeast Regional rounds of the Phillip C. Jessup International Law Moot Court competition, held at the offices of Shearman & Sterling, in New York. This year, a total of eighteen law schools competed in the Northeast Regionals. After facing four other teams during the preliminary rounds, and subsequently defeating Cornell University in the semi-finals, our team reached the finals, arguing against Columbia, and placing as the Runner-Up.

The team was composed of Julie Bloch (LLM ’19), Marwa Farag (JD ’20), Pimvipa Kunanusorn (LLM ’19), Samuel Lim (LLM ’19) and Alexandra S. Maurer (JD ’19).  The team was coached this year by Charlotte Verdon (JD ’21) and Mustafa Khan (LLM ’19). They collected several additional awards along the way, including the award for second best memorials. Three out of the four oralists were ranked amongst the top ten oralists, and Marwa Farag won the award for best oralist of the competition. We’re very impressed with their accomplishments!

As the Runner-Up of the Regionals, the NYU team will now advance to the International Rounds in Washington DC during the first week of April, where more than 150 teams from all over the world will fiercely compete to bring the 2019 Jessup Cup home.

Launch of the Pauline Newman Program in Science, Technology, and International Law

For the average (Western) person, October might be synonymous with Halloween, but for the IILJ, October has now become International Law and Pop Culture Month. As readers may remember, last year we hosted the first edition of this symposium, in collaboration with Opinio Juris, with great success...We were honestly blown away by the extremely positive reception and knew we had to do it again. >

Professor Kevin Davis has published a piece for the online symposium Corrupting Democracy: Interrogating the Role of Law in the Fight against Corruption and its Impact on (Democratic) Politics hosted by Verfassungsblog. >

By discussing popular culture from an IL perspective, we hope to: imagine alternatives of what the world could be, offering many possible visions of human beings, law, and justice; engage with students by making connections between popular culture and international law; and create a space for conversation.>