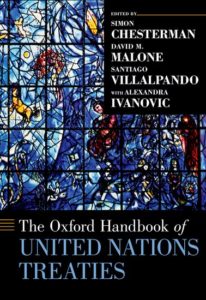 This event will celebrate the publication of The Oxford Handbook of United Nations Treaties. Professor Jose Alvarez will engage two of the volume’s editors, Simon Chesterman, Dean of the National University of Singapore’s Law School, and David M. Malone, Under-Secretary-General of the UN, on some of the issues addressed between its covers, primarily in order to stimulate an exchange with those attending.

The United Nations is a vital part of the international order. Yet this book argues that the greatest contribution of the UN is not what it has achieved (improvements in health and economic development, for example) or avoided (global war, say, or the use of weapons of mass destruction). It is, instead, the process through which the UN has transformed the structure of international law to expand the range and depth of subjects covered by treaties. This handbook offers the first sustained analysis of the UN as a forum in which and an institution through which treaties are negotiated and implemented.