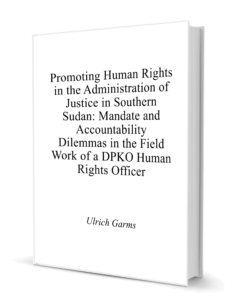 The UNMIS Human Rights Section is called to promote respect for international human rights standards as part of a peacekeeping operation in a post-conflict society. As such, it is exposed to conflicting but equally legitimate demands from different stakeholders. To illustrate some of the dilemmas arising in practice from the tensions between these demands, the paper looks at three case studies taken from the work of the UNMIS Human Rights Section in Southern Sudan. They concern the tension between customary law and the protection of women’s rights, the right to counsel in capital cases, and justice for atrocities committed during the civil war. The paper argues that, also because of the inherent fundamental contradictions in what a field presence such as the UNMIS Human Rights Section seeks to achieve, attempts to promote meaningful accountability of the field operation for the results obtained encounter significant limitations.