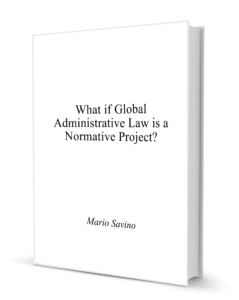 Since its birth, a decade ago, the global administrative law (GAL) project has been criticized for the lack of elaboration of its normative foundations. GAL scholars either belittle the import ance of the “normative deficit” question, or they cautiously suggest that the GAL project is “normatively modest” and its constitutional ambition limited. The aim of this contribution is to challenge that modesty and suggest one way of reconciling GAL with constitutionalism. In the following, I argue that (a) GAL focuses on three functional dimensions—global regulation, global execution, and global adjudication—each involving a different legitimacy problem; (b) GAL scholarship proposes for each problem a specific recipe, that, despite its seemingly “neutral” administrative envelope, bears a normative content; (c) this normativity can be best conceptualized in constitutional terms, by relying on the theoretical framework offered by constitutional pluralism, in its cosmopolitan version.
FacebookTwitterEmail