In their provocative article, A Public Laboratory Dewey Barely Imagined: The Emerging Model of School Governance and Legal Reform, Professors James S. Liebman and Charles F. Sabel explain, chronicle, and advocate a shift to polyarchic network governance as a way to improve public schools throughout the United States. The authors suggest that networks — seen as a “new form of participatory collaboration between citizens and the agencies of government” — also help to improve the quality of public education by introducing flexible, best-practice approaches into the classroom. In their most hopeful moments, they consider whether such networks, with their emphasis on monitoring, benchmarking, and reflective practice, can reshape democratic institutions by encouraging pragmatic experimentalism and creating neo-Madisonian forms of accountability.

Crisis is key to Liebman and Sabel’s explanation of how such networks come to be formed by otherwise unconnected groups with divergent interests. As they tell it, education professionals, politicians, and parents are increasingly coming to reject dominant educational models that depend either on centralized bureaucratic control or on wholesale privatization. This rejection, converging with demands from all quarters for educational innovation, unglues established power structures and creates public space for stakeholder networks to appear. In this response, we focus on the crucial role of crisis in Liebman and Sabel’s diagnostics and in their prescription for educational policy.

Ever since the USSR launched the Sputnik satellite in 1957, commentators have used the language of crisis to urge reform of America’s schools. “[W]ithout mathematics,” the Saturday Review warned that year, “democracy cannot hope to survive.” A generation later, officials spoke of “a nation at risk,” pointing to the “rising tide of mediocrity that threatens our very future as a Nation and a people.” Liebman and Sabel continue this tradition, but utilize the notion of educational crisis to underpin a different political theory of social change.

In Part I, we point to some of the limits of crisis-driven network governance for the formation of community, inclusion of the disadvantaged, and durable realization of high-quality public education for all. In Part II, we turn to the role of courts, arguing that evolving forms of rights-based public interest litigation, particularly in state courts, is critical in encouraging local, countervailing sources of power that can compel and sustain education reforms in public schools outside the temporary and narrow context of crisis-driven convergence. We share the authors’ view that stakeholder networks offer possibilities for innovative policy development. But insofar as the network polyarchy model depends for its vitality on a unifying sense of crisis, and is unmoored from a strong sense of rights and enforcement, Liebman and Sabel risk leaving public education a loser from the buffetings of ordinary politics once the evanescent unity of crisis disappears. 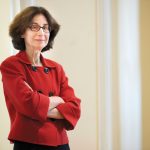