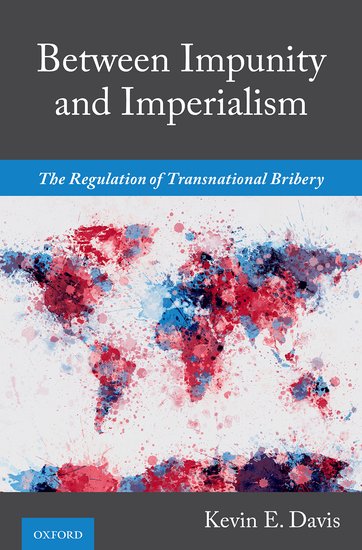 Professor Kevin Davis’ book, Between Impunity and Imperialism: The Regulation of Transnational Bribery describes the defining features of modern regulation of transnational bribery and its dominant critiques and suggests inclusive experimentalism as an alternative to the current dominant approach.

From the publisher: “When people pay bribes to foreign public officials, how should the law respond? This question has been debated ever since the enactment of the U.S. Foreign Corrupt Practices Act of 1977, and some of the key arguments can be traced back to Cicero in the last years of the Roman Republic and Edmund Burke in late eighteenth-century England. In recent years, the U.S. and other members of the OECD have joined forces to make anti-bribery law one of the most prominent sources of liability for firms and individuals who operate across borders. The modern regime is premised on the idea that transnational bribery is a serious problem which invariably merits a vigorous legal response. The shape of that response can be summed up in the phrase ‘every little bit helps’, which in practice means that: prohibitions on bribery should capture a broad range of conduct; enforcement should target as broad a range of actors as possible; sanctions should be as stiff as possible; and as many agencies as possible should be involved in the enforcement process. An important challenge to the OECD paradigm, labelled here the ‘anti-imperialist critique’, accepts that transnational bribery is a serious problem but questions the conventional responses. This book uses a series of high-profile cases to illustrate key elements of transnational bribery law in action, and analyzes the law through the lenses of both the OECD paradigm and the anti-imperialist critique. It ultimately defends a distinctively inclusive and experimentalist approach to transnational bribery law.”

Chapter 1: Introduction
Chapter 2: Imperial anti-corruption law
Chapter 3: The birth of modern transnational bribery law
Chapter 4: The modern regime
Chapter 5: Criteria for evaluation
Chapter 6: What is bribery?
Chapter 7: Prohibitions that extend beyond bribery
Chapter 8: When should organizations be liable for foreign bribery?
Chapter 9: How should transnational bribery law be enforced?
Chapter 10: How should responsibility for regulation be allocated?
Chapter 11: Concluding thoughts