The Morals of the Market: Human Rights and the Rise of Neoliberalism—An Afternoon Reading Session with Jessica Whyte

Co-sponsored by The IILJ History and Theory of International Law Workshops, the Gallatin Human Rights Initiative and the JSD Program 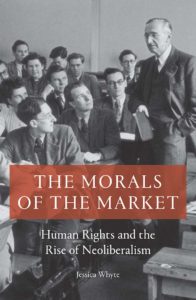 Why did the rise of human rights language in Anglo-American and European states in the 1970s coincide with the institutionalisation of neoliberalism? And why has the neoliberal age also been the age of human rights?

Drawing on detailed archival research on the parallel histories of human rights and neoliberalism from the 1940s onwards, The Morals of the Market (Verso, 2019) uncovers the place of human rights in neoliberal attempts to develop a moral framework for a market society. In the wake of World War Two, early neoliberal thinkers saw demands for new rights to social welfare and self-determination as threats not only to rational economics but also to the moral and political order of ‘Western civilization’. Yet, rather than rejecting rights, they developed a distinctive account of human rights as tools to depoliticize civil society, protect private investments and shape liberal subjects. Homing in on neoliberal political thought, the book shows that the neoliberals developed a stark dichotomy between politics, conceived as coercive, violent, and totalitarian and civil society, which they depicted as a realm of mutually-beneficial, voluntary, market relations between individual subjects of rights. In mobilizing human rights to provide a moral language for a market society, the book argues that neoliberals contributed far more than is often realized to today’s politics of human rights.

Jessica Whyte, Scientia Fellow (Philosophy and Law) and Associate Professor of Philosophy at the University of New South Wales.

Paula Chakravartty, Associate Professor at the Gallatin School and the Department of Media, Culture and Communication, NYU

Please RSVP here; Chapters of the book will be sent to those who plan to attend.

The IILJ History and Theory of International Law Workshops are presented with the support of the NYU Global Institute for Advanced Study, Project on International Legal Orders and their Histories.

The International Society of Public Law will hold their 2022 Annual Conference July 4 – 6 in Wrocław, Poland.

The Law & Society Association (LSA) will hold a Global Meeting on Law and Society in Lisbon, Portugal, from July 13-16, 2022.