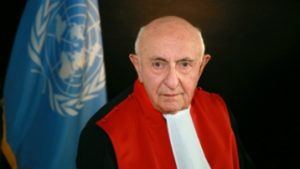 Meron was named an Honorary Companion of the Most Distinguished Order of St. Michael and St. George (CMG) by Queen Elizabeth II. His investiture took place in London on 2020 January 15.

This two-day symposium will bring together scholars and practitioners from around the world to critically examine the transnational system of governance that regulates football (soccer) through the lens of gender.

The Challenges of Judging International Crimes